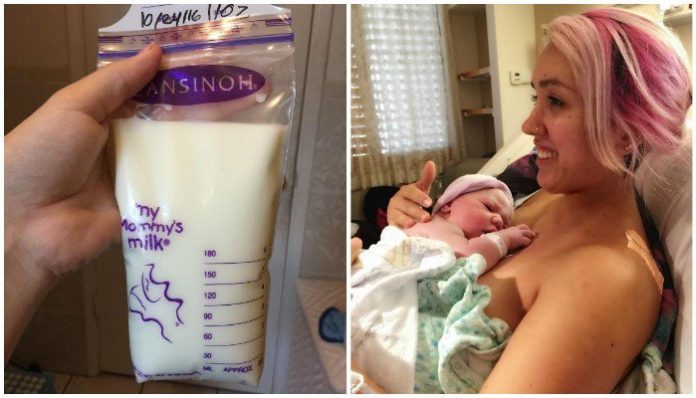 Losing a baby can be one of the most painful and sad events to happen to a mother. The life that has grown inside her uterus for nine months, the dreams and the aspirations for the tiny being, gone.

Eleven days after he was born, her sweet baby boy Ronan passed away.

But when this happened to Ariel Matthews from California, she found a beautiful, selfless, and inspiring way to work through her grief.

From Grief to Giving

As time went by, Matthews painstakingly pumped all the breast milk that her body was producing for Ronan, amounting close to 150 lbs., even more than her own body weight.

In the 11 days of Ronan's sweet life, I pumped 398oz of milk/colostrum. I plan to donate, and to keep pumping for awhile. If anyone knows any local mamas in need, I'd love to give it to them. #sanjose #breastmilk #pumping #liquidgold #donate

This staggering amount of breast milk was given to three families. There were two mothers whose bodies did not produce milk after birth, and another family that had adopted an infant.

Matthews’ milk, although it was meant for her own baby, made a positive change in the lives of others.

What is so admirable about her story is that she took what was a heart wrenching situation and found a way to give and support others—at time when she herself probably needed support.

Although the pumping was exhausting, she was happy to do so. And the three families that benefited from her breast milk would all send her their babies’ photos after they had been fed on her milk—their tummies full, expressions of contentment on their faces.

Giving the milk was an a way to express the love and devotion to the son she had lost.

Matthews used the power of social media to share her journey and inspire others. She posted photos of her beautiful act of self-giving on Instagram, reaching many other mothers, caregivers, and people.

Perhaps through this sharing other mothers who find themselves in the unthinkable situation of losing a baby may take comfort in knowing that they can donate their breast milk as she did, helping with their own grief, and to others in need.
On her Instagram, she wrote, “I’ve always wanted to inspire people but never knew this would be the reason why.” She also said, “If my story is bringing hope, and light, I couldn’t be more happy.”

Matthews with Noah, her three-year-old

This was not the first time Matthews lost a baby. A year previously, she had also lost a little one. She donated her breast milk to those in need at that time as well.

Opening Up the Conversation About Loss

Matthews also hoped that by sharing her own journey on social media, and thus making it available to many others, she could take a topic that is relatively taboo, and open it up.

We all know how important human support is during times of grief. But many women who lose a baby inevitably experience shame and may feel like they cannot express their feelings openly in society.

In being entirely open and frank about everything that happened to her, Matthews is empowering such women to open up as well.

Not only that, she is giving them a way of working with their grief, of giving to others.

Next: Firefighter’s Wife Startled When He Tells Her They Can Keep Baby He Delivered At Work >>