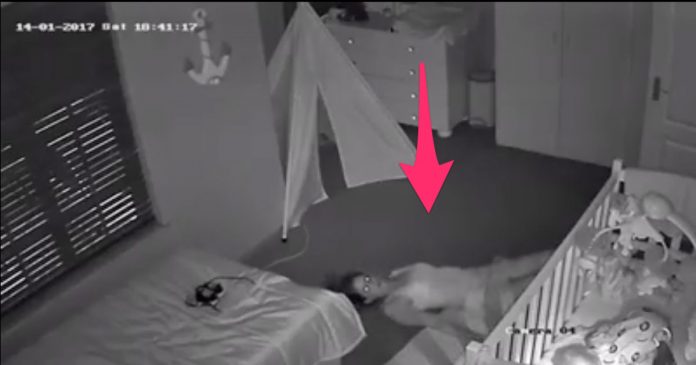 Every parent knows what it’s like. You’ve had a long day, and even though you love your little ones dearly, they need to sleep. Not just so that they grow, but also for your sanity. Babies are the cutest, neediest, things on the planet.

I remember plenty of nights putting my little ones down to sleep nice and slow, and then freezing and breathing soundlessly until I was sure they were sleeping. If there’s no stirring, I would tiptoe to safety while praying they didn’t wake up.

And I took that stealthy sneaking away very seriously, but that’s about as far as I would go in terms of planning a soundless escape. Place gently, freeze, tiptoe away to safety.

Caryn Morris from South Africa, on the other hand, the thirty-two-year-old mother of fifteen-month-old baby boy Brody, took things… a little further.

In the ridiculously hilarious video below, she can be seen performing the kind of stealthy escape that would put elite commando units worldwide to shame. Or perhaps be introduced into the next training batch.


Morris told the Times Live that she and her husband were having guests for dinner that evening when little Brody, who would usually fall asleep on his own in his cot, sensed something interesting happening. He wanted to get out of the cot and join the fun. Every time Morris left the room he stood up and made a sound. So she ended up sitting on the floor by the cot where he could see her.


Little Brody lay there, his eyes open. When Morris lay back she noticed that Brody didn’t move or try to do anything. Little by little, the crafty mom slithered toward the door on the rug, until she was out of the room. She didn’t look back or check on Brody inside—she was afraid he would notice her!

The impressive manoeuvre she pulled has been dubbed “the mom crawl” and “the reverse leopard crawl” and several other names since the video, uploaded by her husband, has gone viral online. I would add “the super stealthy escape” and the “rug-crawling disappearing act.”

Many other mothers have commented on the video, confessing that they, too, regularly perform… extreme getaways for the sake of a couple hours of undisturbed, kid-free time.

I wouldn’t be surprised if Paramount Pictures has already contacted Morris to have her teach Tom Cruise the technique before the next instalment of Mission Impossible is filmed, or if talks are being held with Navy SEALs to acquire the special “mommy escape” method.

Be that as it may, one thing’s for sure: in the world of parenthood, desperate times call for desperate measures.